Switch to the dark mode that's kinder on your eyes at night time.

Switch to the light mode that's kinder on your eyes at day time.

Switch to the dark mode that's kinder on your eyes at night time.

Switch to the light mode that's kinder on your eyes at day time.

‘This Is Us’: Kevin Begins to See the Bigger Picture in ‘The Guitar Man’ (RECAP)

Memories of past failures circle present-day Kevin as he tries to prove he’s a capable father, and ponders his authenticity. Meanwhile, Cassidy suffers her own crisis.

Tonight’s episode of This is Us brings us nearly to the midpoint of the show’s final season. On the heels of the traditional Thanksgiving episode, tonight’s installment – episode number eight – also marks the start of another series tradition: the Big Three trilogy, where each Pearson sibling gets their own spotlight episode. Kevin (Justin Hartley) is up first.

The episode explores incidents in three time periods where Kevin grapples with what he thinks of himself; he gets a swimming lesson around age 6, he drowns in his sorrows after the Thanksgiving Sophie break up, and takes the twins across the country to the cabin on his own, to spend a weekend with Nicky (Griffin Dunne), Edie (Vanessa Bell Calloway), Cassidy (Jennifer Morrison), and Cassidy’s son Matty. The beginning of the present-day story is set to the episode-eponymous song “Guitar Man.” The song is about a man who earns the adoration of everyone but is always moving toward some new place or goal seeking something. It’s a perfect representation of Kevin’s story, especially in the flashbacks and present story of this episode.

When the doctor tells them to return home, Kevin seems almost giddy to know that Cassidy didn’t relapse, but Nicky has a dark look on his face. He warns Kevin that Cassidy isn’t the kind of person to give a heads up if she was in a dark place as she had to lie constantly with her position in the military. 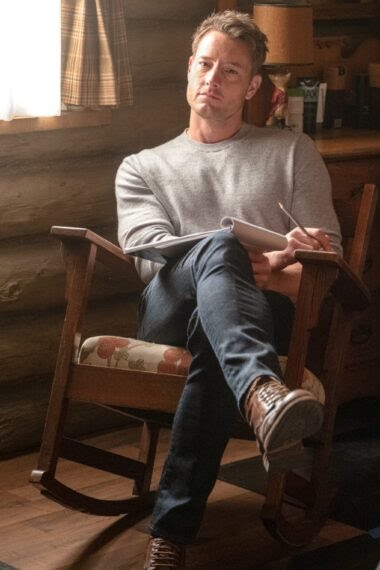 After some much-needed perspective, the reality of Cassidy’s predicament begins to sink in for Kevin and he decides to stay at the hospital. Nicky tells him to just be there, don’t try and fix things, just be there. And so, Kevin sits and waits. When he’s finally permitted to enter her room, he finds her face torn up a bit, but otherwise unscathed on the surface.

She tells him that she’s been having a hard time and to cope she takes drives at night since she doesn’t sleep. During the drive, she kept thinking about how nice their evening together was and how she didn’t want it to end. As she got more tired driving, she let her eyes close and kept her foot on the gas, leading to the accident.

The reveal is emotional, and when Nicky enters the room, he sits by Cassidy’s bedside to support her with Kevin.

At the cabin, Kevin cares for the twins and talks to Matty whose dad, Ryan (Nick Wechsler), is coming to pick him up. Before he arrives, Kevin invites Matty to help him make a get well soon card for Cassidy with paint. Bonding over the project, the boys bid farewell when Ryan arrives and Kevin takes a peek at construction on the property before visiting Cassidy again at the hospital with Nicky.

This Is Us recap: Kevin suffers a crisis of confidence in first Big Three trilogy episode

In his quiet time at the cabin, Kevin talks to his twins, remembering their grandpa Jack, saying that he would have made the Pearson compound happen if he’d lived long enough, and this motivates Kevin to do the same. When Nicky returns home with Cassidy, the men help her get situated and unveil her room in the cabin from now on.

‘This Is Us’: Kevin Begins to See the Bigger Picture in ‘The Guitar Man’ (RECAP)

While looking around, Nicky notices a pad of paper filled with sketches from Kevin for “Big 3 Homes.” When he inquires about the meaning behind the drawings, Kevin asks about hiring more veterans, and Cassidy says they have enough for the house, but Kevin gets ambitious and suggests building more.

What could be Kevin’s sleeve? Will he follow Jack’s dream? It seems so, but we’ll have to wait and see for sure. One thing’s for certain as he gets on the plane to return to California, he’s getting the hang of this father thing with Franny and Nicky.

Stay tuned for Kate’s episode of the trilogy as the final This Is Us season continues.

What do you think?

No posts match the widget criteria

Please check if there are posts that match all the below criteria. If not, remove the wrong ones in the widget settings.

© 2022 by bring the pixel. Remember to change this

Back to Top
Close
close

Your password reset link appears to be invalid or expired.

To use social login you have to agree with the storage and handling of your data by this website. %privacy_policy%